You’re at a club on a Friday night, eager to have fun and lose yourself in the music. You see two people in the line for entry and have instant reactions to each of them. You want to connect in some way but don’t want to just outright ask or tell them everything. This isn’t the place for that. Try to let them know how they make you feel in other, more subtle ways.

The Way You Make Me Feel is inspired by Janelle Monae's "Make Me Feel" and is about exploring a single night at a club and finding out where it all leads in the end. Will you all leave together? Apart? Just two of you? Are you friends? Enemies? Lover? Something else? None of the above?

To play this game, you will need a Rider-Waite or similar Tarot deck, either as a physical deck or via an app. You may also want writing utensils, paper, and note cards.

In order to download this tabletop rpg you must purchase it at or above the minimum price of $1 USD. You will get access to the following files:

Reviewed this with Game at a Glance! This game really hits the beat of the "Make Me Feel" song by Janelle Monae (which it is based on). The use of tarot cards to show as representation of your character viewed by others is a BRILLIANT mechanic that I have never seen before. Having an idea of each area, the pros of cons, and how they help you push the narrative for each of the characters is wonderful.

I really want to play this game soon! But I really enjoyed reviewing it and making up characters and extra locations with the chat.

Highly recommend if you are looking for a gm-less game that can work with three players (which is also rare to find!) that helps you dive into the development of relationships.

The Way You Make Me Feel is a short multiplayer rpg about picking people up at a club.

It's 2 pages, with solid layout and even a sort of vague map, which helps a lot with placing everyone in the narrative.

WYMMF doesn't have hard mechanics---anyone can step into a soft-GM role, and success/failure is decided by group consensus. Tarot cards are used, but they're more prompts than a resolution mechanism. They simply shape your initial perceptions of the game's two eligible NPC bachelors.

Overall, WYMMF is a very open-ended and (possibly) casual romance ttrpg. I think it benefits from doing a bit of world-building up front (a high-fantasy-modern-world-mashup setting would be really delightful), but as long as your group is comfortable with a game about clubbing, this seems like a solid oneshot.

-This was impossible to find via the itch search function. Neither the title nor madpierrot produced any results. Not sure why. I wanted to mention this in hopes that it helps the game stop being buried.

Three players. A GM is optional.

is there a guide as to what the cards players draw mean or anything?

or do we have to know how tarot works

I'm not sure if I mention it in the pdf text itself but there's a few different resources you can use.

I don't have a specific guide or a deck specifically for this game though. Hope that helps!

It does, thank you 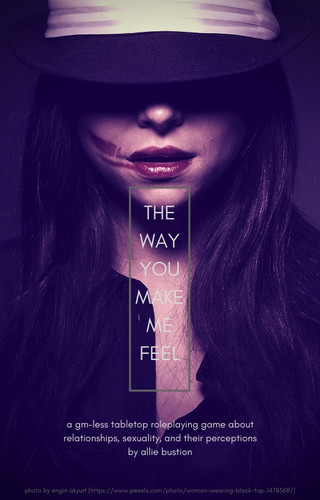