The world is ending around you and you’re trying to make your way to some place you consider safe. You’re not sure if it is safe but you’ve heard rumors.

As The World Ends... probably won’t end happy. It isn’t meant to. It’s a chance to explore things we normally don’t allow ourselves to. Things we hide. Things we cling to. Moments we live for. Sadness. Regret. Hope. This is about hoping against hope. By the end, you may have nothing physical left. But you might have some feelings that you finally dug into and examined. Hopefully, that gets you something or somewhere you may not have otherwise.

In order to download this game you must purchase it at or above the minimum price of $1 USD. You will get access to the following files:

As The World Ends is a 2 page apocalypse-survival game inspired by Train To Busan.

Despite being only two pages, it's got a great crunch to it, and it does some really inventive things with character death and statlines, making every part of your character impermanent, but meaningful.

It's also semi-GMless, which works in its favor, allowing PCs who die to join in on the GMing role. And PC death is definitely a thing in World Ends. It's never triggered by a bad roll or forced through GM action, but choosing to die allows you to throw a powerful bonus onto a roll, swinging the story in a direction of your choosing.

I really dig this game. It's quick, easy to pick up, it lets everyone collaborate, and it pulls everyone into the story very effectively.

If you don't like character death, you never have to use the mechanic, so you can play an exciting but optimistic-toned apocalypse, or you can use the mechanic often and have a lot of meaningful, intense tragedy.

Basically, this is real good, it's absolutely worth picking up, and I'd recommend it to anyone.

Does this game allow you to choose your Apocalypse or is it pre-determined?

The game implies (but definitely doesn't outright state, which I should probably fix) that your Apocalypse is built collectively by the table. You can do that on the fly, giving a vague premise and adding details as they come up, or at the very start of the game, building yourself a pretty set sandbox. It's totally up to you. 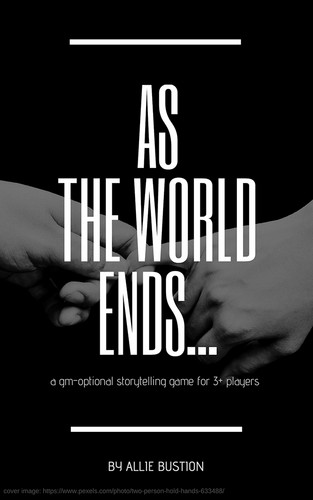